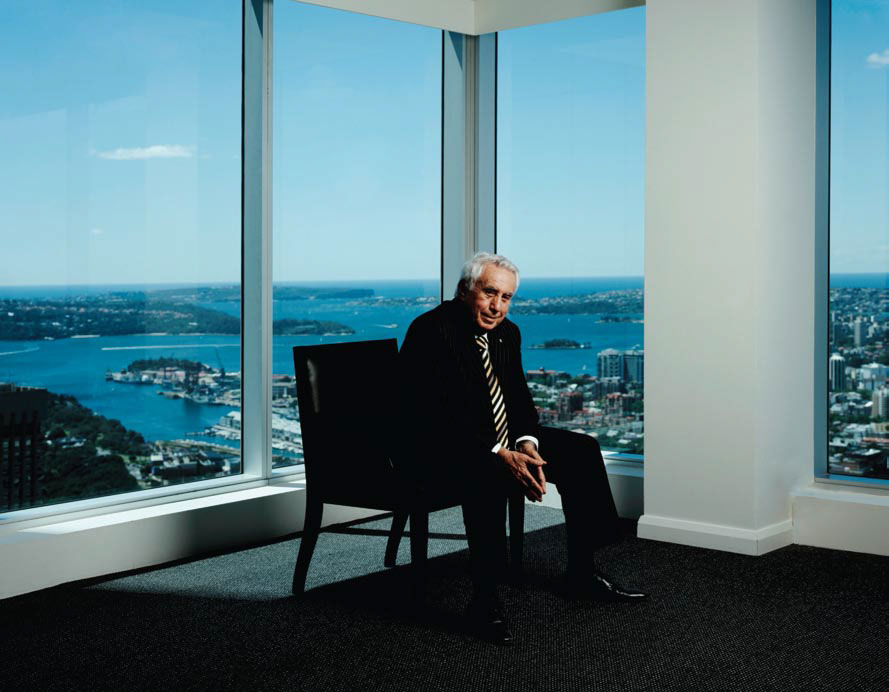 Yourself and Meriton have changed the way people “live” in Australia. As you approach 50 years in the industry, what do you see as your greatest professional achievement?

When I look back at 50 years I’m sure that the greatest achievement is that I have survived in the business and I have grown all the time. Because it is obvious that it is a very difficult business and I managed to do it without going public or without having any partners. On the other side it’s been very gratifying to see that I was able to start from very low beginnings. I was building blocks of 8 units and now I’m building blocks 80 floors high. And it gives me a great feeling. The third thing is that I have been proved correct when I always believed only in apartments and said that people would prefer apartments. I never built one cottage in my life.

You take a personal interest in every facet of every development; do you have one particular area of interest that is your personal building passion?

The passion I have in building is first of all I always look for innovations. For instance if I see that plumbers have started to have their stacks going horizontally instead of vertically then I run and change it because I think it’s better or if I saw that the brick layers were slow I went into prefabricated slabs. So I am always looking at ways to improve the efficiency. Efficiency is what I am always looking for. And if one subcontractor does one thing better than another then I teach the guy, the one that is slower to copy the one that is more efficient. Now my other passion is that I want blocks to move fast, so I always take an interest in anything which blocks quick progress.

Describe your management and leadership style.

As the business moves forward I always like to take people from doing one thing to do another thing. That way I think it is more interesting for them and shows them they can do more than what they were doing before. That is good for the business and its good for their moral. The other thing in business is everyone must pull together. Once there is friction it would not be tolerated, I would never tolerate friction in the business.

Meriton is unique from many of its competitors in handling all aspects of a development from finance through development to construction and final sales and leasing. But what is that defines the philosophical essence of the Meriton brand?

We do all these things, we are in finance, we do build ourselves, we plan ourselves, sell ourselves and manage the properties after we sell them and we keep a lot, which have to be managed. The importance of that is that when we do everything from beginning to end ourselves we know the business very well. So it’s all controlled by us, by the company. The other thing is if we can make a little bit of profit say from the way we buy the land or the way we build or the way we sell or the way we can give finance to the purchasers then there is more opportunity for us to show high profits and less chance of losing money.

Staff loyalty is very high at Meriton, what is your approach to retaining good people?

Staff loyalty is very high because I always try to give them continuous work. This is very important in the building industry. Other building companies cannot give continuity to their staff of work because they may have a job one day in Melbourne and then the next day in Adelaide and then Sydney. We try to give people continuous work and that proved to us essential when we had problems with the unions 40 years ago. Staff knew that they would always have work in Meriton. Otherwise it would be very difficult to get them to be on my side and not create havoc and strikes.

What is the update on your current projects: Infinity in Brisbane and Victoria Square in Sydney, two of the largest ever undertaken.

Infinity will be the tallest, very similar to the other two. It’s very exciting when we build a tall building as it progresses you see the various views changing and giving something different others can’t give. But the philosophy is that we try to build as soon as we can after acquiring a property. We do not speculate whether it comes at the right time or the wrong time. Once we buy the land then it’s the right time as far as we are concerned.

If the market is still subdued then we will be renting more properties every year, and the company will not grow as fast as it could otherwise. If the market will stop being subdued which is what I believe it will be, then we will be able to sell more and build more and keep more, but it depends on the market, as to the speed in which we progress.

The importance of Meriton is that we always build apartments in areas where rents have always gone up and that gives me confidence to progress the way I do and I don’t think that would change. The rents will continue to go up all the time.

We tried hotels before and we didn’t like them at all, but maybe the timing was wrong. We did hotels approximately 15 years ago. We had a number of hotels but we turned them into apartments and sold them off.

Affordable is a key issue for the Federal Government, as a major supplier of affordable housing, what is your opinion of their approach to the issue?

They have to understand that their schemes, (they have many financial schemes) which have never worked because they did not allow for profits to be made. Interest rates must be kept low. Inflation in the Western World was beaten when China started to export cheap goods and services. We are fighting inflation which is no longer here.

People who buy apartments must be reasonably sure that they will make a profit. Just like anyone putting money on deposit with the Bank. Housing is not a stock market where shares bounce. Housing must gradually go up. And that is controlled by supply of money (interest rates) and rents (supply of housing). Both of which are controlled by the government to a great extent.

What policies would you like to see implemented at state and/or federal level in regards to the housing market?

Whenever we have a new Minister or a new party in power they want to start all over again and then they promise things which in practice don’t work and they seem to be terribly concerned about what they said. That should not concern them. Because if we run a business we change our minds all the time and it’s not because we are crooks and not because we are liars but that is how life is, so this attitude that you’ve said something and you change your mind means that you are a liar or ignorant has to go. You have to adjust as time goes on.

We have to set targets. The problem with governments of all levels they have no targets. They must have a target, how many apartments must be built, how many people must be housed, they have no targets they just go and do the best they can. The next thing is there are local minorities and they should never be given more power than they deserve which is very little, because there are very few of them. But what happens is that when people become unhappy then they turn to these minorities and suddenly these local minorities become quite powerful. But if we do our job properly then these people who like to make a lot of noise will be forgotten.

Interest rates effectively drive the housing market from development right through to the purchase stage. What would you like to see implemented in regards to policy?

The people now say that we should not have inflation or inflation should be very low. That means that they don’t want prices of houses to go up a great deal. So why would you buy a house if the rents are a lot cheaper than the repayments on the loan to buy an apartment? And that must be understood by the government so when they know what the rents are then the repayments must be similar and that is dictated by the interest rate. Today the difference is probably about 20% so either interest rates must come down 20% or rents go up 20%. Now interest rates can be brought down 20% in one minute whereas rents to rise 20% might take years. So the decision is there. Drop the interest rates.