Allen Jack+Cottier (AJ+C) is one of Australia’s most awarded architectural firms, with 58 years’ experience in planning, architecture, heritage conservation, urban design, interiors and graphics, combined with a youthful ability to see things in new and dynamic ways. 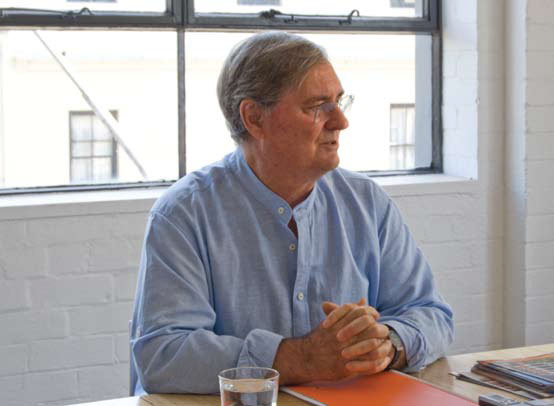 Based in Sydney with offices in Brisbane and Perth, and projects in Malaysia, Vietnam, China and the Middle East, AJ+C employs 90 practitioners and has a longstanding commitment to high standards and ecological sustainability.

Reg Smith became CEO in 2008, following over 34 years practicing architecture as a Director of the firm. His goal is to further enable the company’s innovations in conceptualising built environments both for Australia and abroad.

Can you give us a bit of insight into your background and career with Allen Jack+Cottier?

I started in architecture in 1962 and have been working in architecture ever since. My first job was with a company called Lightfoot and Stanton, which specialised in RTA motor registries and designed the original Penfold’s Winery facility at Tempe in Sydney. I studied architecture at the University of NSW and also worked for some of the good offices around the city.

In one of my university holidays, I went off overseas to see what was happening architecturally and got a job with a London architectural firm. After I came back to Sydney and graduated, I worked at Harry Seidler’s practice.

I joined AJ+C in 1974. At that time, it was still a partnership comprising John Allen, Russell Jack and Keith Cottier, and I was one of the next generation of partners in the company.

One of my jobs as CEO is to formulate a succession plan for the practice. I took over management in 2008, when the NSW building industry was going into recession. We could see that work was down, and then we experienced the global financial crisis, which put a hold on the succession plan. We had to learn to be more effective with fewer resources.

Currently, I am in the process of finetuning the company and putting a new structure in place. In today’s market, you have to be smarter in running a practice as things are a lot tighter.

Does Allen Jack+Cottier specialise in any specific areas of architecture?

A lot of people ask ‘What does your practice specialise in?’ I like to think that our practice does not specialise in any one area, rather we do work in many different fields and in varying market sectors. Our landmark projects have changed the way people live and work, and have influenced how they think about design. These include town and commercial centres, residential developments, wineries, healthcare facilities, schools and universities, libraries, churches, cinemas, art galleries, carparks, hotels, spas, and sporting venues in Australia and internationally.

The primary discipline of the practice is straight architecture. Over the years, we have carved a niche in the residential market. We designed Moore Park Gardens, one of Australia’s leading medium density residential developments with 560 apartments, which was singled out by Sydney Morning Herald’s Elizabeth Farelly as “creating not just a community, but a genuine middle class chic.” We also designed large scale town centres like the 120 hectare Rouse Hill, in conjunction with Rice Daubney and Group GSA, which has all the facilities of a small town, including a shopping-centre precinct, commercial space, a nine-screen cinema complex, education, library and community facilities, a health and medical centre, and good transport links.

One of our specialist areas is Urban Design, where we have a unique combination of private and public practice, with expertise ranging from masterplanning, preparation of urban design guidelines, design of built form and public domain, to determining development  controls in existing town centres.

We believe that there must be synergy between conservation and transformation. We have architects who specialise in adaptive re-use with a focus on re-lifing buildings. Buildings are greenest when they have already been built. This is basically about sustainability, many of the buildings in the city now are substandard and use so much energy, we have to address the situation. This is an area where the government can step in and make it a lot more attractive for developers to stimulate the re-lifing area of the market. An extension to this is heritage conservation. Often a project involves a heritage listed site and there are specific priorities involved. We are lucky to have the knowledge internally so that we can design with these priorities in mind and create a functioning building whilst keeping its historic significance.

We have also established ourselves as an Australian market leader in aged-care facilities, with particular focus on facilities specialising in dementia. The design of ‘The Meadows’ in Hammondville, southwest of Sydney, has been adapted in many dementia care facilities since. A fair amount of our work is in residential aged care facilities, and independent living units, which all have specific designs for disabled standards.

Another growing market for us is on-campus student residential housing. We currently have a number of student housing projects in Perth, and completed projects at Kelvin Grove (Queensland) and New College (for the University of New South Wales).

We have a history in sport and recreation, designing Pit Lane at Bathurst NSW and a suite of sports facilities for the NSW Department
of Sport and Recreation including the Berry Sports Hall which won the sports category at the 2009 World Architecture Festival’s Award.

Can you tell us a bit about some other recent Allen Jack+Cottier projects?

We are practising all the way from the South Pole to Mongolia. In Antarctica, we are working on the Davis Station Research Station’s Recreation Centre, which has a very functional design. To accommodate the prevailing winds the curved shape of the building enables the wind to blow above and below the structure. In the upper northwest China, we did the planning for a new city on the Mongolian border.

We have been working in China for nearly 10 years, the focus in the last two years has been on large-scale towns with multi level high-density residential developments. These include Cambridge Waters in Shanghai, which has 1500 apartments in stage 1 and 3500 apartments in stage 2 and Jin Sha Zhou in Guangzhou, a 27-hectare site which will integrate residential, retail and community facilities over four stages. A 250-bed Crowne Plaza Hotel in Taiping Lake, west of Shanghai, which we are designing, is also currently under construction. It is a very exciting time for our Asian markets.

Since the beginning of this year, the Australian residential market is starting to pick up again. We have just finished work on the Stockland mixed use development at Balgowlah on Sydney’s North Shore, which was constructed by the Abi Group. This residential development is inspired by the landscape of Sydney’s Northern coastline and the ‘casual’ lifestyle it beckons. ‘The Village’ comprises a Coles supermarket and 60 specialty shops, 240 apartments with district and coastal views, restaurants and cafes, native gardens, and a resort style 25 metre swimming pool, a community club as well as parking for more than 1000 cars.

The beauty of this design is the understated appearance of the shopping complex in relation to the residential aspect of the building. The
challenge was to strike a good balance, ensuring that residents enjoyed the convenience of living above an active retail environment, while the sanctuary of their private home is preserved. The whole idea integrates retail and residential elements into a framework that provided a relaxed living experience.

The AJ+C Brisbane team recently completed a new office building, A1 in the new urban precinct SW1 in Southbank, in association with Cox Rayner. Situated amidst several arts and cultural landmarks, the SW1 development will eventually comprise four commercial and six residential buildings. The A1 building has seven storeys of commercial space which is currently tenanted as well as ground floor space,  which we fitted-out pro-bono for the Queensland Centre of Photography.

Where do you see the future direction of Allen Jack+Cottier?

The Internet has changed the whole face of architecture for us, and all the big practices. We can now work more effectively on large overseas projects in collaboration with other practices, as these projects would be too big to do alone and would therefore tie up too many of our resources.

We are also working in Vietnam, and we have been approached to do a big submission in Qatar for a housing development catering to nurses and doctors, attached to a research centre. We have also been approached by an Indian steel company that is building a steel plant, which will recycle the energy from the steel production to power cities built around the plants. So we will be submitting designs for these integrated townships.

Australia does not have enough work for the bigger practices, so the only way for us to grow is to look offshore and go global. However,  that’s not to say that we neglect our local market here in Australia; we are lucky that due to the fact that we have such a diverse range of building types and associated clients, we can adjust to changes in the market.

Another area that we see as a growth sector is of course, sustainability, and we have around 25 accredited staff who specialise in this field. Sustainability goes right across all our projects, and is something that has always been there as far as we are concerned. However  ow, due to governmental laws and the BASIX regulations, it has become a requirement for all design submissions, so this has increased its focus.

Globalisation has changed the way we do architecture. We have embraced it and with the talent that this practice possesses, I see a very exciting future for AJ+C, as well as Australian architecture in general.